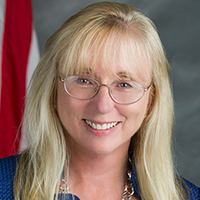 Eileen M. Decker previously served as a United States attorney and was the chief federal law enforcement officer in the Central District of California, a sprawling district based in Los Angeles that encompasses seven counties. During her service, Decker oversaw the largest U.S. Attorney’s Office outside of the District of Columbia, which employed approximately 280 attorneys serving almost 20 million residents. The United States Attorney’s Office prosecutes the entire range of federal criminal offenses, defends the United States in civil actions and represents government interests in tax matters.

After being unanimously confirmed as U.S. attorney by the Senate on June 11, 2015, Decker was given a four-year appointment by President Barack Obama. As part of her duties, Decker served on five attorney general advisory committees ― Civil Rights, Cyber/Intellectual Property, Terrorism/National Security, Violent and Organized Crime and White Collar/Fraud. Along with many of her colleagues who were appointed by President Obama, Decker resigned on March 10, 2017.

Decker was recently named a specialist with the Department of State, Bureau of Education and Cultural Affairs, a program that allows her to travel overseas to lecture and consult on issues of importance to foreign institutions and governments.

Prior to becoming an assistant U.S. attorney, Decker was in private practice for three years at the law firm of Gibson, Dunn & Crutcher in Los Angeles. She also served as a law clerk to U.S. District Judge Gary L. Taylor in the Central District of California.

Decker received her undergraduate and law degrees from New York University. She also received a master’s degree in homeland security studies from the Naval Postgraduate School and, in 2007, was a Wasserstein Fellow at Harvard Law School. In addition, she is a past president of the Women Lawyers Association of Los Angeles.